Why the African Medicines Agency? Why Now? 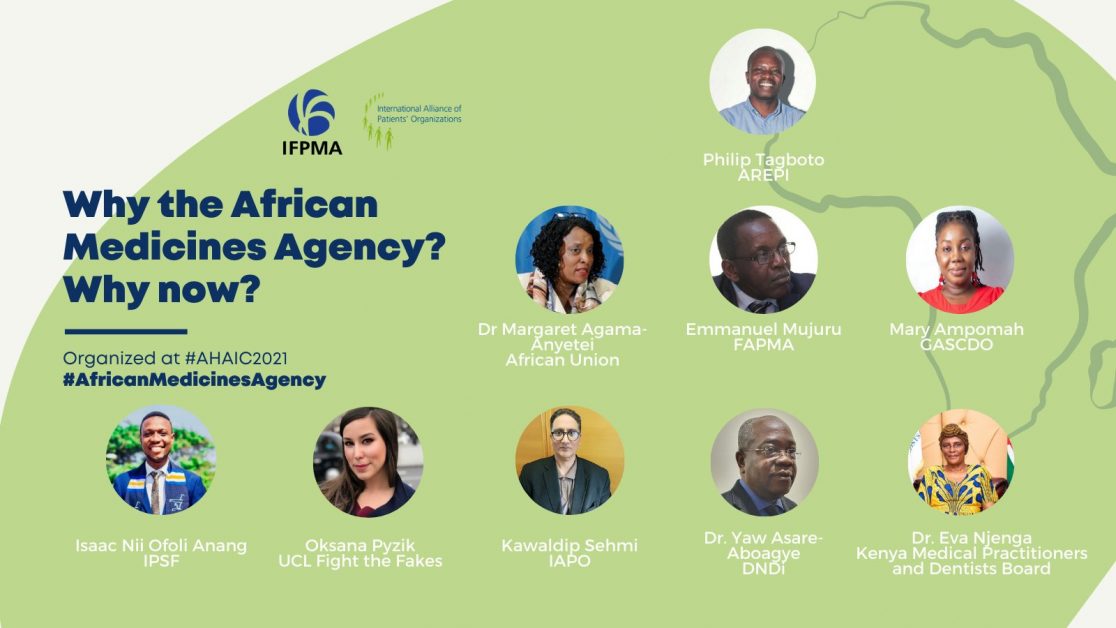 On 10 March, a panel discussion entitled “Why the African Medicines Agency? Why Now?” organised by Fight The Fakes members IAPO and IFPMA took place at the Africa Health Agenda International Conference 2021.

To date 19 Heads of State of the African Union have signed the treaty and only 8 have ratified it, leading to an important delay in establishing the African Medicines Agency, that needs the ratification of 15 countries.

The eight speakers shared their arguments and support for the urgent ratification of the African Medicines Agency Treaty and also how the agency could play a key role in fighting the widespread of substandard and falsified medical products on the continent, which has worsened ever since COVID-19.

Mary Ampomah, President and CEO, Global Alliance of Sickle Cell Disease Organisations (GASCDO) highlighted how important it is for the sickle cell community to have access to safe medicines, and get a chance for a better life in Africa. The African Medicines Agency would contribute to speeding up the approval process of medicines, and thus medicines would be available quicker. She stressed on the importance of involving patients in the process.

He was followed by Dr Eva Njenga, Chair of the Non-Communicable Diseases Alliance of Kenya (NCDAK), who stated that the ratification of AMA would allow greater coordination among African countries and would allow progress monitoring towards Universal Health Coverage. Equally it would ensure an efficient implementation of intellectual property rights. Finally, through harmonising and centralising health systems across Africa, the AMA would allow countries to share resources and create safe and efficient international and national frameworks for better healthcare.

Oksana Pyzik, Senior Teaching Fellow, Global Engagement Lead and Founder of UCL Fight The Fakes highlighted that Sub-Saharian Africa is one of the regions most affected by illegal drug trafficking in the world. Stating WHO Director General Dr Tedros she said that “No Universal Health Care will be possible without quality medicine”. The AMA will ensure prevention on, protection from and response to counterfeit medicine. She finally underlined the role of the Fight the Fakes Alliance in raising awareness on substandard and falsified medicine and supporting victims of these crimes. 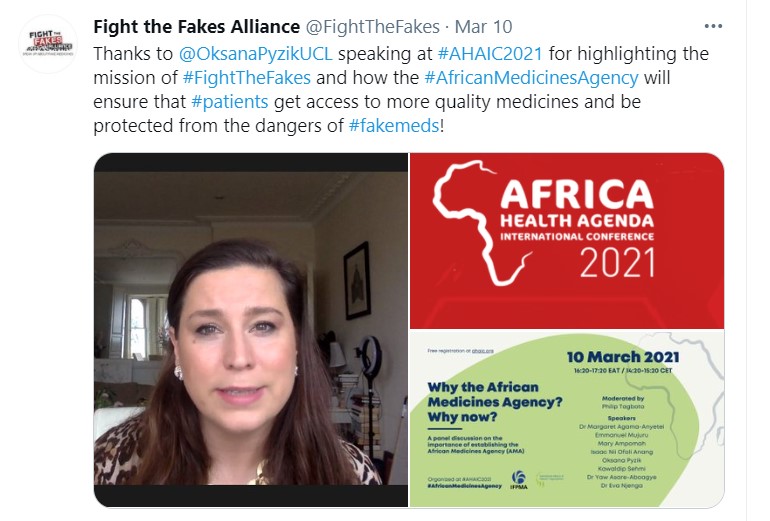 Echoing his fellow panelists Emmanuel Mujuru – Chair of the Board of the Federation of African Pharmaceutical Manufacturers explained that African countries do not have strong coordinated regulatory systems which causes delays in drug manufacturing and distribution. This challenge needs to be addressed to ensure quality healthcare in Africa. Strong and harmonised health systems will help reduce the widespread of counterfeit medicines.

After him, Dr Yaw Asare-Aboagye Head of Regional Clinical Operations at Drugs for Neglected Tropical Diseases Initiative (DNDi) expressed his belief that AMA would enhance the speed with which medicines reach patients across Africa. There are too many different health requirements among Africa countries today. Regulation needs to be centralised and expertise shared in order to ensure the quality of products and the impact of efforts taken in the field of health. The AMA would provide clear guidelines and allow the sharing of knowledge to the benefit of research.

Shortly following, Dr Margaret Agama-Anyetei Head of Health, Nutrition and Population Division Africa stressed the importance for National laws to realign. There is a legislative blur around the functions of the AMA, therefore she encourages stakeholders to read the treaty in order to understand that AMA is not a threat to national sovereignty. Civil societies must act to influence their governments to ratify the treaty.

Finally, Kawaldip Sehmi CEO, International Alliance of Patients’ Organizations (IAPO) explained that AMA is essential for a Pan-African vision of health in the future and therefore called on civil society, stakeholders and governments to achieve its creation and to ensure that we have a patient and people centred health institution in Africa. He announced the establishment of the African Medicines Agency Treaty Alliance to support this. COVID-19 has reset the terms of our social contract, that is why we need this agency.

Fight the Fakes was present also in a virtual booth at the conference in order to answer questions about the growing impact of falsified and substandard medicines.

Join the Call to Heads of State of the African Union to Ratify the African Medicines Agency Treaty today!
Categories: EVENTSUPDATES